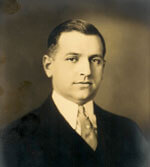 Few names mean more to the history of 20th century New Haven than Celentano. It is synonymous with dedication, compassion, and service. Certainly the Celentano Funeral Home has provided these qualities to the families of Greater New Haven for more than 85 years. Established in March of 1926 by the late William C Celentano, the firm originally occupied facilities at 434 Elm Street. In 1931, the Celentano family purchased the John Richardson House at 424 Elm Street, an elegant villa constructed in 1844. The building was remodeled and the funeral home was moved to that location in the autumn of 1934. The family completed an extensive addition to the property in 1954, and added expanded parking facilities in 1965 as part of the Dwight Redevelopment Project.

William C Celentano was born in 1904 on Howe Street, the son of an immigrant fruit merchant. As a boy, he worked in the family fruit store located across the street from Beecher and Bennett Funeral Home. It was there that he gained his early experience in funeral service. He attended the Renouard Training School for Embalmers in New York in 1924 prior to starting his own business. He boasted both a New York and Connecticut embalmer’s license.

The sense of compassion and service that had led to his establishing the funeral home also prompted Celentano to enter political life. In 1929 he was elected Republican alderman from the 21st ward. He served on the Board of Alderman until 1945, when he became the Mayor of New Haven, the youngest man ever to win that office. During his tenure as mayor, from 1945 to 1953, the New Haven Redevelopment Agency was born and the urban renewal process began. In addition to his political activities, Mayor Celentano served, at various times, as the president of the Connecticut Funeral Directors Association, the Connecticut Board of Examiners of Embalmers and Funeral Directors, the Conference of Funeral Service Examining Boards of the United States, and the Amity Club of New Haven. He was also the first chairman of the New Haven Equal Opportunities Commission. He not only established the Celentano Funeral Home, but operated it until his death in 1972.

William C. Celentano Jr. officially joined his father in the business in July of 1961. A graduate of Hopkins Grammar School, Villanova University, and the San Francisco College of Mortuary Science, he, like his father, was president of the Amity Club and served for nine years as the Executive Director of the Amity Charitable Trust. He was named Greater New Haven Jaycee of the year in 1971. In 2009, he was a recipient of the Gold Ring Award from the New Haven Boy's and Girl's Club Alumni and the Charles Carroll of Carrolton medal from John Barry Assembly, Fourth Degree Knights of Columbus.

The third generation became a reality when Mark W. Celentano joined his father in the family business in 1989. A graduate of Hopkins, Lafayette College, and the San Francisco College of Mortuary Science, Mark served as President of the Connecticut Funeral Directors Association in 1998 and remains Co-Chair of the Association’s Legislative Committee. He represented Connecticut as a member of the National Funeral Directors Association’s Policy Board and continues to serve NFDA as a member of the Advocacy Committee and Chairman of their Political Action Committee. Mark is a Certified Funeral Service Practitioner and a member of the British Institute of Embalmers.

Personally, and through their direction of the Celentano Funeral Home, Bill Jr. and Mark carry on the rich family tradition of dedication and dignified, compassionate service by continuing to serve the families of greater New Haven.